A Future Home for SquashWise! 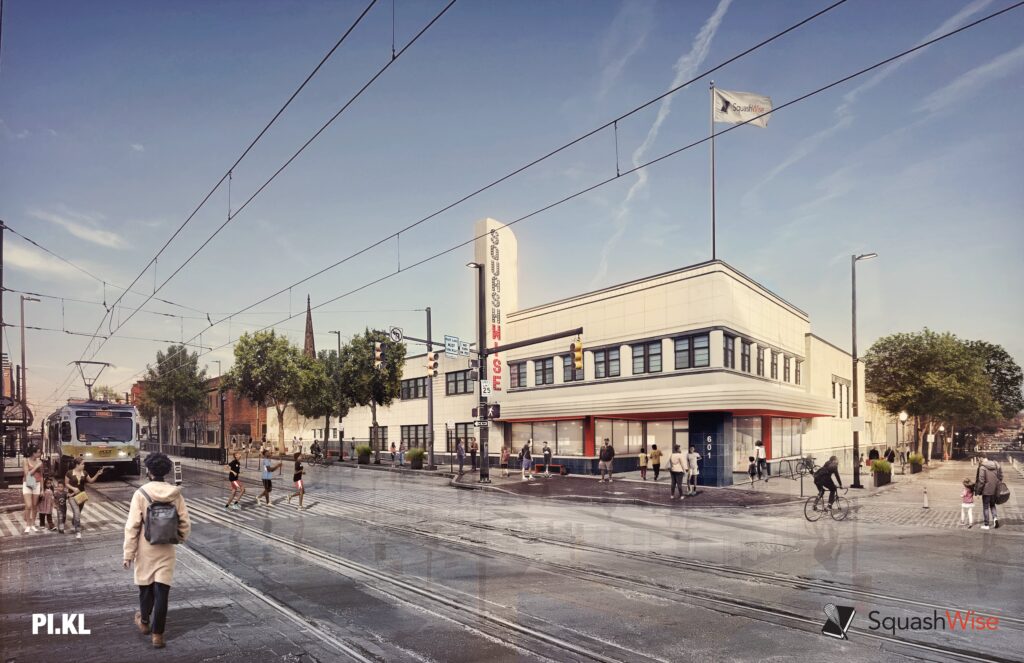 SquashWise has acquired the former Greyhound terminal on the campus of the Maryland Center for History and Culture (MCHC) in Baltimore’s historic Mount Vernon neighborhood. This purchase will enable SquashWise to further advance equity and opportunity in education and squash for Baltimore youth and to restore a memorable building in the city. We are thrilled to work with PI.KL Studio as our architects and are in the early visioning and design phase. The building is expected to open in late-2023 to become a permanent home for SquashWise and a community squash gym expanding access to squash beyond its traditional settings. Read more below in our press release, and to make a gift toward our building campaign, please click here!

Press Release (May 2021): SquashWise partners with Baltimore City student-athletes to play, learn, and grow in all aspects of their lives, using the racquet sport of squash as an opportunity-generator. The program offers a combination of tutoring, squash coaching and competition, fitness, and college and career readiness, with impressive results, including more than 80% college matriculation, in comparison to 45% among graduates of Baltimore City Public Schools at large.

Operating since 2008 out of Meadow Mill Athletic Club in Woodberry, SquashWise has been seeking a permanent home for many years. With the recent announcement that Meadow Mill Athletic Club will close on 7/30/21, the Greyhound project is even more critical for SquashWise’s future. It acquired the Greyhound terminal from the Maryland Center for History and Culture in a real estate transaction on May 11. Richard Blue, Paul Obrecht, and J.C. Beese from Blue and Obrecht represented SquashWise in the transaction, and David Baird and Michael Denise from Cushman and Wakefield represented MCHC as the seller.

“SquashWise is thrilled to co-locate with the Maryland Center for History and Culture,” said Abby Markoe, Executive Director and co-founder of SquashWise. “As institutions with a shared mission to promote lifelong learning, the campus will truly embody the values of education, growth, and community and contribute to the vibrancy and revitalization of the Market Center Historic District.”

The site of the former Greyhound terminal located at Howard and Centre streets—functional as a transportation hub from 1941-1987—holds a deep history in Baltimore and is on the Baltimore City Landmark List. The themes of “new destination” and “going places” align with SquashWise’s ambition to amplify the many talents of Baltimore City youth who are among the future leaders of our community. The Greyhound site combines the ideal geographic location for transportation, access, and transformation. Located in central-west Baltimore along the Light Rail, it represents the intersection of what Dr. Lawrence Brown describes as the “Black Butterfly / White L,” or the “two Baltimores” that are the result of structural racism and fragmented investment in the city.

While a diverse sport internationally, squash in the United States has been known as an exclusive and predominantly white sport, played largely in country clubs, elite colleges, and private schools. SquashWise is the only public school squash program in Baltimore, working with students who largely reside in neighborhoods experiencing the continued effects of structural racism and historic disinvestment. Just as it took years to increase access to lacrosse, SquashWise for nearly 15 years has worked to make squash more accessible and inclusive, along with similar programs in cities across the country like Philadelphia, Chicago, and Detroit.

Its plans for the Greyhound terminal include six squash courts, a multipurpose fitness space, classrooms, and a rec room. The facility will become a community center which bridges communities through a shared love of squash and sport, and it will expand the reach of squash beyond its traditional settings. SquashWise will host its after-school tutoring and sports programs, along with community memberships, local matches, and regional tournaments. It also intends to partner with other educational and cultural institutions in the area, including the Maryland Center for History and Culture, to the benefit of its participants.

Savoy Adams, a SquashWise alumnus and sophomore at Loyola University of Maryland, joined the program as a seventh grader and continues to be involved in leading its alumni network. Savoy reflected back on his time at SquashWise and its future.

As part of its strategic plan, adopted in 2016, the Maryland Center for History and Culture’s Board of Trustees agreed to offer the organization’s unused real estate—including the 28,836-square-foot Greyhound terminal it acquired in 1999—to redevelopment in order for MCHC to focus its attention and resources on spaces that meet its needs and further its mission.

MCHC’s ongoing campus redevelopment plan is intended to respect and enhance the neighborhood, in addition to benefiting the long-term vitality and fiscal health of MCHC.

“The Maryland Center for History and Culture is thrilled to share its campus with SquashWise, a like-minded organization that elevates and empowers Baltimore youth” said Katie Caljean, Vice President of Education & Strategic Engagement at MCHC. “The transition of SquashWise’s headquarters to the Market Center Historic District will give the historic Greyhound terminal a promising new future, and lend to revitalization efforts taking place along the Howard Street corridor.”

SquashWise expects the facility to open in late-2023. To stay in touch and learn more about the project, sign up for SquashWise’s monthly newsletter here. Donations are welcome and appreciated here, or by getting in touch with Executive Director, Abby Markoe, at abbym@baltimoresquashwise.org.

SquashWise partners with Baltimore City youth as they reach their academic, athletic, and life goals. We currently work with more than 100 participants and graduates of our program, a number which will grow by nearly double once in the new facility. Each year, more than 90% of our rising 9th graders gain entrance to high schools with selective entry requirements, and more than 80% of our graduates matriculate to college. SquashWise is proud to partner with KIPP-Ujima, a Title I charter school in west Baltimore, and with the Squash and Education Alliance, a network of more than 20 programs like SquashWise across the country.

About the Maryland Center for History and Culture (MCHC):

The Maryland Center for History and Culture (MCHC) collects, preserves, and interprets the history, art, and culture of Maryland. Originally founded as the Maryland Historical Society in 1844, MCHC inspires critical thinking, creativity, and community by exploring multiple perspectives and sharing national stories through the lens of Maryland. As the oldest operating nonprofit cultural institution in the state, MCHC houses a collection of 7 million books, documents, manuscripts, and photographs, and 350,000 objects in its museum and library located in Baltimore. MCHC also serves as a leading center of Maryland history education.